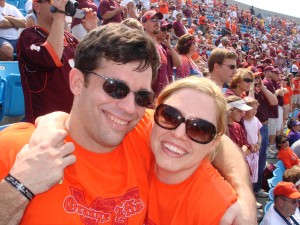 The Real Vegan Housewife is none other than Robin Fetter.  She has considered herself a “lazy vegetarian” since age 13 and went vegan back in August 2008 along with her husband Chuck.  Since her transition to veganism, she has made great strides in breaking a lot of vegan stereotypes and convincing non-vegans on how simple cruelty-free cuisine can actually be.  Her vision for The Real Vegan Housewife was to pull the curtain back on a typical vegan family….her own!  Her goal is to inspire everyone- especially families and show them that going vegan is not only healthier but is attainable!

On her LONG list of vegan accomplishments, her first award was winning 2nd place in the 2010 Cupcake Throwdown at the Charlottesville Chocolate Festival.  It was the only vegan entry but it impressed the both judges and cupcake enthusiasts alike.  Back in June 2011, she decided to take on the Engine 2 Diet and shortly thereafter, it grabbed the attention of the New York Times Best Selling Author of the Engine 2 Diet, Rip Esselstyn, who immediately started promoting her blog.  As the popularity of The Real Vegan Housewife grew, she was asked by well known vegan chef, Chef AJ to review her latest book, UnProcessed and since then that cookbook has became Robin’s new healthy eating Vegan Bible.  Back in October 2011, she held her first cooking demo at Whole Foods in Charlottesville, VA (Thanks Kristen!) and in December 2011, her article “Confessions of a Real Vegan Housewife” was published in issue six of T.O.F.U. Magazine.  So far that issue of T.O.F.U. is the most popular yet!  But her writing did not stop there since on January 2012, her interview with Kathy Divine on vegan parenting made it into the pages of the Vegans are Cool book.  And a year later, she did an interview on Ed Coffin’s podcast, Eating Consciously, where she discussed how easy it is to have a vegan pregnancy and to raise vegan children in a nonvegan world.

In her spare time, Robin loves all things vegan and helps co-organize her local Vegan Meetup Group and is the founder of her local Veg Parenting Network.  You will also see her at the local Health Starts Here meetups at her local Whole Foods.  She currently lives in Charlottesville, VA and raises the perfect vegan family (Chuck, Raegan, Camille, Shadow, & Roscoe!).