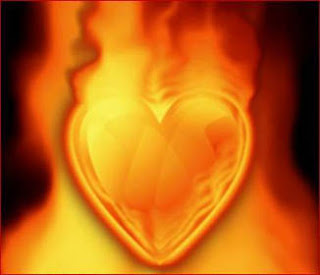 I know what you’re thinking…”What a horrible title!!!”  Well I guess I am feeling pretty rusty due to recent events but all bad jokes aside, the human body is a mysterious thing…Once you think you have it figured out, it throws you a curveball like no other.  This is pretty much what I have been living with for quite some time.  As most of you know, I suffer from Acid Reflux Disease (GERD for the know-it-alls out there!).  I thought I had it under control until a few weeks ago- pretty much since my last post but this time it came in full effect and it was very scary to say the least.  For those of you who never dealt with it (I envy you!), it can feel like you are walking around with constant chest pains….and of course you feel like you are having a heart attack and are close to dying!  This bad reflux spell pretty much made my life impossible to say the least.  In fact, I was probably being impossible to my husband in the process since he had to deal with my numerous phone calls while he was in the office urging him to go home as the pain was so unbearable.  Luckily, Chuck is trained in my reflux anxiety and found ways to help me over the phone without missing much work.  But there is a light to the end of this tunnel…
Recently, I have been seeking alternative medicine to alleviate my GERD and surprisingly enough, it has been working well so far.  I am not one to jump on the “Alternative Medicine Wagon” and I don’t see myself as doing such even after such a great experience.  In my opinion, I still have confidence in our medical doctors and the technology they bring to the table.  I just still feel that Alternative Medicine can help those with chronic conditions to improve the quality of life and that’s exactly what happened to me.  Now I can do what I do best and that is to continue my blog and share my vegan experiences with all of you 🙂 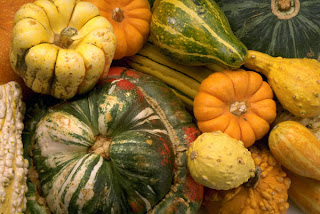 So now onto a bigger and brighter subject….Have any of you seen all the varieties of squash at the Farmer’s Markets lately???  I will admit, I grew up only knowing only two kinds- The green zucchini and the yellow squash.  Not too long ago, when I saw all these different types and varieties of squash, and it was intimidating to me since I really wanted try it but yet not cook something that I find out later was actually an inedible gourd :p  But, after brushing up on my knowledge, I feel pretty confident about this often overlooked veggie.  I will warn you, I did omit the Acorn Squash from this post but fear not, I have a squash garden growing as we speak and I am hoping to give you guys a separate post for this just in time for the Thanksgiving holiday!

Ok, I am starting out with the most intimidating of them all….the Spaghetti Squash.  Is it pasta or is it a really stringy vegetable???  Well, it’s kind of a bit of both.  I found that baking it and getting the beautiful pasta like threads was the easy part, but knowing what to top it with was another.  My first stop was a video from Vegucating Robin….as in Robin Quivers, Howard Stern’s sidekick and fellow vegan (two vegans named Robin…I like it!).  Unlike Ms. Quivers, I am not lucky enough to have Chef Gavin cooking Spaghetti Squash in my kitchen but at least I was able to snag this video….

Just as a side note…Spaghetti Squash is not going to give you the type of pasta that you can twirl with a fork but it’s more like the pasta you break into thirds but it’s still delicious 🙂  I will also tell you that I have managed to omit the oil in Chef Gavin’s recipe involving the cherry tomatoes and fresh basil.  I also made my own concoction using 1 squash with 3 Tablespoons of fresh herbs (mostly sage but I did use Thai basil, chives, and parsley) and a couple tablespoons of Earth Balance (or any vegan butter…I know not exactly low fat!) for the creamy texture.  Basically, the key is to use only fresh herbs but I do have a friend who just tops her spaghetti squash with her homemade marinara pasta sauce so the possibilities are endless.  Here is a photo of my 2 Spaghetti Squash creations for a little inspiration… 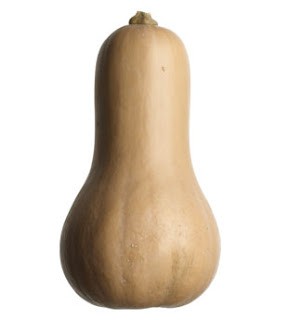 Now on to a member of the squash family that has really won my heart….The Butternut Squash!  The first time I ever used Butternut Squash was in a delicious recipe I found in VegNews Magazine called Creamy Harvest Pasta.  This recipe is pretty versatile and there’s no added oil, in fact you can substitute the soy milk with any kind of vegan milk or even use gluten-free pasta instead in this dish.  This recipe was just too easy to not screw up.  Before this recipe came around, I thought Butternut Squash was only for soup!!!  On another note, it would actually be a HUGE injustice if I did not include a recipe that I created in honor of this wonderful vegetable.  This recipe is a veganized version of a typical Butternut Squash dish I keep finding on the internet.  It is not exactly low fat so for all of those who are on the Engine 2 Diet or any other low-fat vegan diet, please look away (ok you can peek…I swear I won’t tell a soul!).  The Field Roast Sausage links in this recipe can be found at Whole Foods or any store with a decent mock meat section…

8oz (1/2 of a typical package size)of Whole Wheat Penne Pasta, cooked and drained according to directions

2 Field Roast Apple Sage Sausage links, sliced 1/4 inch thick (or use a very sage-like vegan sausage…you’ll thank me later!)
1 medium onion, chopped
2 teaspoons of minced garlic
1/2 teaspoon of salt
1/2 teaspoon of pepper
1 teaspoon olive oil
1 cup soy creamer (or any other vegan creamer…So Delicious makes a great coconut milk creamer)
1 teaspoon of dried sage (not the powder!)
2 teaspoons of cornstarch mixed with 1/4 cup water
Salt and Pepper to taste (I like a lot of pepper in mine)

Preheat oven to 350°.  Mix Butternut Squash, garlic, onion, salt and pepper and bake for 30 minutes.  The squash will be a tad “al dente“.  In a large skillet, brown Field Roast (or your vegan sausage of choice) in oil and remove from pan.  In the same pan, add soy creamer, roasted Butternut Squash mixture, and sage and cook until boiling.  Then add cornstarch mixture and continue to cook until the sauce thickens.  Once the sauce is thickened, add the browned Field Roast sausage and cooked pasta.  Serve immediately.  Serves 3-4 people.

….So this concludes the much long anticipated post dedicated to squash.  If you have a squash recipe that deserves a little recognition, just feel free to send me an email or post it in the comments section below…I’d like to thank all of you in your patience with this post and there will be a lot of posts coming your way as I have signed up for Vegan MoFo (Vegan Month of Food!) which is coming soon so I have to be ready to have my mind all about food!  Luckily I have 2 great reviews coming very soon and also a couple of holiday ideas in store so you don’t want to miss it!!!

1 thought on “Heartburn Out, Seasonal Squash In…”