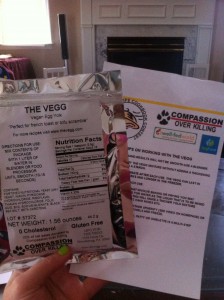 Their version of a sample was the FULL size…How awesome is that!

Looking back, this Summer has given me such a HUGE excuse to be lazy…But I have been dabbling with nabbing free vegan samples of items I have yet to try and when the nice folks at The Vegg offered on Facebook to give out free samples to bloggers in order to review their innovative product, I took no time to tell them who I was and within a week I got my sample in the mail.  To say I was excited to try this heavily buzzed about product was definitely an understatement…

Just to give you a background on The Vegg, it’s not a whole egg replacer but it’s actually replacing the part that has been missing in a lot of vegan egg substitutes The yolk!!!  In order to enjoy The Vegg in your next tofu scramble or in a sunny side up egg (never thought you’d hear that in your life again, huh?), you still must use something to make up the egg white portion of the recipe.  The Vegg offers a lot of tips and recipes in order to make that possible and all of which are REALLY simple!  I have only used half of the pouch of The Vegg so far because I want to make something really epic with the rest of it like a really Monte Cristo sandwich but I want to perfect the ingredients and do things the right way so I get something that even a non-vegan would rave about!

Moving forward, when I looked at the nutritional info of The Vegg, I was impressed.  It is low sodium, despite the fact it uses black salt as one of the ingredients and it is VERY low in calories!  Then once you blend The Vegg powder into water, the consistency and the taste is waaaaaaaay too good to be true!!!  It took me back to when I was a kid and how I enjoyed dipping my toast in the yolk of my over-easy egg!  The first thing I did was make a tofu scramble, using Rocky’s recipe from The Vegg website.  The result was un-freakin’-believeable!!!  I no longer had to add spices to enhance the flavor of the scramble!!!  OK, I still used turmeric for color but that’s just a personal thing with me 😉

Next, I made French Toast using The Vegg.  I will admit, I never liked French Toast as a kid because of the egg batter on the toast (it kinda grossed me out…possibly a pre-vegan awakening?) and I found that although I still am not a fan of French Toast, The Vegg gave me back the accurate texture to the batter that goes away with most vegan French Toast recipes. I would have posted my breakfast photos of The Vegg but I’m pretty hungry in the mornings and it’s hard to remember to take photos of your food when you are famished 😉

Despite my lack of breakfast photos, I was inspired at my local Farmer’s Market to make an old Southern favorite of Fried Green Tomatoes…It’s hard to find a decent vegan version of these things and The Vegg answered my prayers!  I served them with my homemade vegan Chipotle Mayo and it resulted in something VERY beautiful… 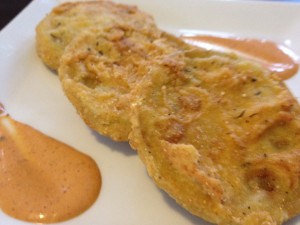 I could easily eat this by the truckload!

Most of you looking at this photo will be begging me for the recipe but I gotta hold this one back as I will be contributing it to the upcoming Vegg Cookbook which should come out sometime next year.  But for now, I still have that half packet of the unused powder and a few other ideas coming up that I’ll be happy to post for all of you.  For now, go and buy The Vegg and see for yourself how great of a product it truly is!  Best of all, one packet makes 30-40 yolks and for the price of roughly 7 bucks, it is one hell of a deal in comparison to real eggs- Without the cholesterol or cruelty!!!

3 thoughts on “The Year of The Vegg…”