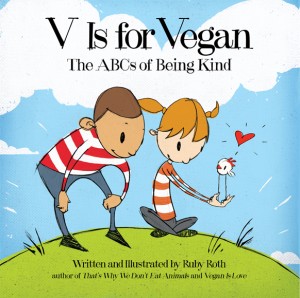 I’ve got a (yet another) confession to make…When I found out I was pregnant with Raegan, I was excited to share with her all the books that made me smile as a kid.  And back when I was a future vegan in the making, I was quite the bookworm and I definitely give my love of reading and my thirst of knowledge to leading me to vegetarianism when I was 13 and eventually veganism 5 years ago.  Speaking of which, one of these days, I need to share with you guys my story as to how me and my husband became vegan…It was from a pretty unlikely place and the people we talk to love hearing about it!Moving forward, when I gave birth to my first child, Raegan, I had Darlene who is a vegan mom who lives in my town to give me the ins and outs of vegan parenting…items that were vegan, baby food ideas, cloth diapering and good options for disposables when in a pinch.  What I like most about Darlene was that she made it look so easy!  It’s safe to say that without her in my life, The Real Vegan Housewife blog would not be the same blog you are reading today!  Even now that I have 2 kids I still go to her whenever I have a question.  Without her, I would be truly lost!  And as a mom choosing to raise her children vegan, the question I often asked Darlene along with many other vegan moms is how does one explain veganism to a young child?  I want to be honest but yet not instill that anxiety and fear that one gets when they think of another living being being killed or exploited.  Luckily, Ruby Roth has came to my rescue…

It all started when Ruby Roth was an art teacher at an elementary school and was inspired to write vegan children’s books when her own students were curious about why she was vegan.  In addition to her students, she was raising her stepdaughter vegan as well so her ability to engage with young minds is probably much more vast than most vegan moms I know.  I’ve read her first two books (That’s Why We Don’t Eat Animals and Vegan is Love) and felt that those two books would be excellent once my kids were roughly 8 or 9 years old mostly due to length of the book.  But when I heard about V is for Vegan, I knew right away that this book was the right age for Raegan (who will turn three in December).  Please watch the trailer and you’ll know what I mean…

Before I move forward with this post I must give you this disclaimer…In no way shape or form was I paid or given this book by anyone to promote it.  The following views are solely my own and without any bias whatsoever!

Moving right along…I preordered this book through Amazon and got it on my doorstep the day it came out. The UPS guy came around Raegan’s nap time so I got a chance to read it before Raegan did.  Needless to say, as a mom I enjoyed it and I felt that the book was a good choice overall.  I spent a little under $10 for the book and I must say it was money well spent!  I liked the fact that the book was in ABC format so it was a type of book that Raegan was familiar with and the pictures were big and bright so it caught her attention from start to finish.

I have had a chance to read other reviews and some did express over concern over a particular line saying “E is for eggs…From a chicken’s butt?!  WOW!!!” To me it is what it is.  It was actually the main reason I liked the book to begin with- it was honest, to the point, and it spoke in a way that a kid is going to truly understand.  Raegan knew the word “butt” long before this book came out during her potty training and when I read that part of the book to her regarding that poor chicken’s butt, the only response I got was “It’s stinky!”  All I could do was nod and say “It is stinky indeed!”

So long story short, this book will be eventually passed on to my infant daughter, Camille, once she hits Raegan’s age and I am confident she will enjoy V is for Vegan as much as Raegan does right now.  If you need more convincing to get this book…Raegan usually cannot sit down with me or my husband for longer than 5 minutes to read a book.  This photo was taken well after the 5 minute limit: 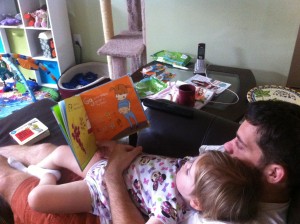 It’s ironic this photo was taken during Raegan’s favorite part of the book!

3 thoughts on “V is for Vegan: A Review from a Real Vegan Mom Raising Two Vegan Girls….”