“That moment when you are stunned by the monster and you have to hit the buttons to set you free..”. (How fitting!)

There are a lot of things we have all been told that you shouldn’t do when you are upset…blogging may be one of them and today I am here to break that rule.  Those who have followed my blog know I am not one to call people out, nor am I one who is quick to reply to the ever so common “I’m not vegan anymore” posts.  Lucky for you, this isn’t a reply to a former vegan.  This is a response to a couple of guys who I once admired greatly, who once prided themselves on spreading the vegan message in “Smalltown, USA” and who at one point actively avoided living in major cities to write a book that was going to reach the masses and prepare all of us for “Vegan World Domination”.

They are The Vegan Bros and for years they have been hitting the ground running, having been in national and international media with a vegan message that anyone with a pulse could get behind.  I liked what they stood for because I am a thirty-six year old vegan woman raising a vegan family and here are two vegan guys who I can see myself having a beer with, talking to the media and targeting “the commonfolk” about a lifestyle that is often seen as extreme.  I will admit, there are some notable folks in the vegan community who do great work but I feel like they don’t speak to someone like me…They are speaking to that twentysomething who lives in an apartment in New York City.  But I digress.  Long story short…We need to reach your everyday “Average Joe” if we want to see more vegans in this world.  This was a message I felt The Vegan Bros and I had an agreement on…That was until today when I read their recent post .

So if you don’t want to read the long post, The gist of it is this…They want to charge you $1,000 for a 1-2 hour lunch in LOS ANGELES (whatever happened to Smalltown, USA?) to share their “wealth of knowledge” with you.  If you sign up after Sunday the amount goes up to $2,500.  They even promise you that the amount is certain to go up even more!!!  This isn’t the Vegan Bros I know.  They wanted “vegan world domination” but now it’s only to those who can afford it.  That is problematic to me and let me tell you why…

It is hard to tell why I started this blog, it started as me and my family who went from junk food vegans to cooking our way through the Engine 2 Diet cookbook and it gained attention by Rip Esselstyn.  Then I became a person who reviewed vegan books, especially cookbooks and I do giveaways from time to time.  I also have been a vegan writer and speaker at Chicago Veganmania and on top of all of this, I have been on several radio shows and podcasts, mainly as a “go-to” on all things vegan or raising a vegan family.  All are great but for years now, I have wanted all of you to know me, Robin Fetter…The Real Vegan Housewife who doesn’t fit the mold of what you see as a vegan.  It’s been a hard process to introduce myself properly to all of you and it appears it took my disgust in a blog post to let myself come through…Nice to meet all of you by the way 😉

The thing I always wanted to emphasize when I speak about veganism, whether on this blog or just me talking to a random stranger (which happens quite often!) is that veganism can be attainable for a regular family living off of one income and with the addition of picky toddlers.  It can be done…It will not make you go bankrupt…you get the idea.  When I see Phil and Matt of The Vegan Bros asking for thousands of dollars for simply 1-2 hours of lunch that probably does not include the meal (which with lunch included still seems pretty high!), it brings back the stereotype that to have any involvement in the vegan community, it’s gonna cost you and it’s literally a mortgage payment!!!

You may ask yourself, “instead of ranting on your blog, why don’t you reach out to them?”  Let’s just say that they found my rant on my personal Facebook page and let’s say that the lack of answers are probably what pissed me off the most… 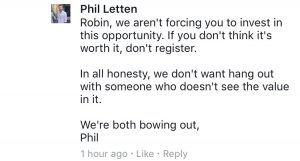 Let me explain this gem…We have NEVER “hung out” nor have they given a rat’s ass about my posts until I questioned their hypocrisy today!

As you can tell, I gave them a chance to speak…I wasn’t looking to fight (more like to be convinced that there was a legit reason).  If anything, I was a disappointed fan who got the sticker shock of her life!  Doesn’t this go against their brand???  Do we need to decide between paying our mortgage/rent if we may be (the rest is taken from their page) struggling with:

Look, I don’t want to give people the wrong idea…I am truly happy whenever anyone can make a decent wage in the vegan community because it’s tough to do.  If you find a passion and you can make a living from it, I am truly happy for you!  The Vegan Bros also know I do not wish for them to be living out of their car and passing out vegan leaflets for the rest of their lives.  I want them to succeed and I still do.  But I need to point this ordeal out because they brought this message that they can get that blue collar, run-of-the-mill person to consider veganism…Even if it started with something simple like Meatless Mondays.  Their target audience is most likely not able to afford this experience- especially if they do not live in LOS ANGELES!!!  I am looking at this list and they may not realize this but I know MANY vegan activists who fit this entire list…But they cannot afford $2,500 for a 1-2 hour lunch to “change their lives” because all of their money is spent on rescuing animals.  Those who are active in the vegan community will tell you that they are overstretched on resources and underappreciated.  I hear it so often that even I feel helpless.

So to end this post without going on another tangent, I really hope The Vegan Bros reconsider this idea.  I would like for them to go back on their tour of small towns and see the average person once again.  Understand that most Americans work 9am-5pm (sometimes much more!) doing jobs that financially barely get them by.  Many Americans are using their income to support their families and maybe have obligations that prohibit a trip to LOS ANGELES (sorry I cannot help myself at this point!).  I am glad you two made a name for yourself in this country filled with people with big dreams…But asking $2,500 for 1-2 hours of your time to simply share knowledge is just further driving the stereotype that veganism is for the elite and I am not going to say nothing.  I also have spent my fair share of years in the media, telling others that going vegan is more simple than it seems and I cannot let two Vegan Bros make a horrible decision to tear down a frequent myth that myself and many other great vegans have worked so hard to dispel.

I know with this post not only will I have supporters, but I will also have those who probably wish I jumped off a bridge.  Please keep comments civil…That’s all I ask out of respect to both myself and Vegan Bros.  Thanks 🙂